Sudanese as a people are the biggest propagators of gossip. It seems that the entire nation is playing a long game of “telephone” where a fact or myth is modified a million and one ways. The result is a hodgepodge of hearsay and rumors. 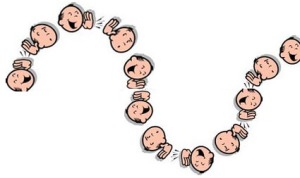 Most of which are rooted in facts that have some validity but the extent to which the actual fact has been distorted is hard to estimate. So I have learned to take whatever I hear with a grain of salt, as there is bound to be someone out there who added a bit or deducted something from the original fact, or made it up to begin with.

These days a stormy cloud of uncertainty hangs over the nation. With the imminent indictment of the Sudanese President, Omar Al Bashir by the International Criminal Court (ICC), everyone here seems to be on their toes, especially those in Darfur. So through the grapevine, stories are circulating that once the official indictment is made public armed militias have been given orders to attack UN agency staff and related NGOs. As a result expatriate staffs are being told to prepare for the worst and expect immediate withdrawal from the Darfur region. There is no way of validating this fact. It could be completely fabricated. Regardless, no one is taking this threat lightly and are consequently preparing for what could happen.

Meanwhile, across the Red Sea in the Qatari capital, Doha talks have been taking place between Sudanese government officials and Justice and Equality Movement (JEM) members. News reports have indicated that both groups have reached a preliminary peace agreement, brought on by intense international pressure. The timing of such talks are uncanny, no telling if this will have any impacts of the ICCs decision to bring Al Bashir’s case to court.

3 thoughts on “Through the grapevine: expected ICC indictment”