After several days in the southern Indian state of Karnataka, I headed up north to the nation’s capital en route to the Himalayan foothills. Luckily it was a Sunday and the infamous Delhi traffic was a bit more bearable. The city has been given a fresh new “wash” if any of you remember the debacle that surrounded the preparations leading up to the Commonwealth Games that took place in 2010. Streets are freshly painted; bright new road signs in 4 languages (Hindi, English,Urdu and Punjabi) adorn the streets; greenery is finely manicured and;  the infamous cycle rickshaws, which for me are synonymous with India were conspicuously absent from areas surrounding major tourist destinations. This reality of Delhi was a far cry from what I had imagined.

Trying to make most of our day in Delhi we began early by hitting up the major tourist destinations. Took sometime to soak in the tranquility of the gardens at the Bahai Lotus Temple, after which we zipped across town and walked around the infamous Red Fort. From there we visited various other parks in the city and of course I couldn’t leave without seeing the magnificent Humayun’s Tomb. After which many of the group members wanted to get some shopping done. So we headed off to discover some of Delhi’s famous street market. 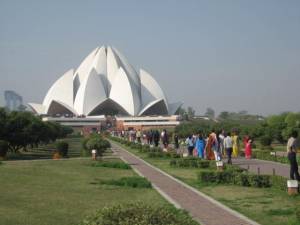 After escaping the tourist hotspots and veering into some of the markets, I began to see through the veneer of New Delhi. Through the cracks one could see old Dilli, the city whose boundaries were once confined to the perimeters of the Red Fort; the Dilli that smelt of sweat, spices and sandalwood… and the occasional wafts of stagnant water. This Dilli was far more colorful, one where chaiwallas (tea boys/men) artfully balance giant thermos on one hand and many cups on the other….serving delicious chai masala (spiced tea with milk). From various food vendors around the streets, steam rose swiftly to join the smog created by autorickshaws, motorcycles and cars. navigation through the streets is a skill that must be mastered, not only must you dodge bi,tri and quadrupedal vehicles, you have to worry about the occasional cow or herd of cows. It is here that I discovered my favorite street food….vegetarian momos, which are essentially similar to chinese wontons (steamed dumplings).

After an eventful afternoon traversing through local markets, we headed to a shopping center is the district of Guragon (technically part of neibouring Haryana State). The spotless, air-conditioned complexes were akin to massive American style shopping centers. Most of the stores were American or European global brands. The appearance of most shoppers was a stark change from what I had seen earlier in the markets. The distinct kurtas and patiyallas (long cotton shirts and loose pants) were oddly missing. Most shoppers with perfectly coiffed straight hair, marched through the malls in jeans and “western” style clothing. As I eavesdropped on various conversations although the majority were Indian, English was always used as a means of communication. The sight of a ladies trying to juggle numerous shopping bags, a purse, while simultaneously talking on a cell phone or vigorously pounding away at a blackberry was common. It is here that I realized the start difference between Delhi and Dilli. I got the sense that a large swatch of the upwardly mobile population now see traditional customs as somehow backwards or constraining and the push towards “western” way of living is somehow more liberating.

All in all it was a great experience visiting the nation’s capital and home the seat of parliment of  the “world’s largest democracy.” That phrase was echoed in several conversations I had with various people throughout my stay.