A sight that is as ubiquitous as Addis Ababa’s distinctive blue taxis are none other than the thousands of listros or “shoe-shine boys” who roam the streets of Addis Ababa. They tend to weary shoes of the city’s pedestrians, giving them  a new ‘face-lift’ and much-needed relief from the city’s abuara ‘dust’ or in kermt ‘rainy season’, chiqa ‘mud’. When I first arrived in Addis Ababa, I noticed the sight of these young boys who line the streets and offer shoe polishing for a mere 2 birr. They diligently smear away the layers of dust and mud and apply a generous portion of shoe shine, that leaves most shoe-soles gleaming. They walk around with distinctive wooden boxes that house their gear and double as a stand for clients to rest their feet as they are being polished. In some areas, some listros have gone as far as setting up strings of stools and using plastic sheets to create umbrellas to guard against the rain and sun. These little listro stalls become chill out spots where you see people sitting in small stools getting their shoes shined, getting their fill of local news or discussing recent events. 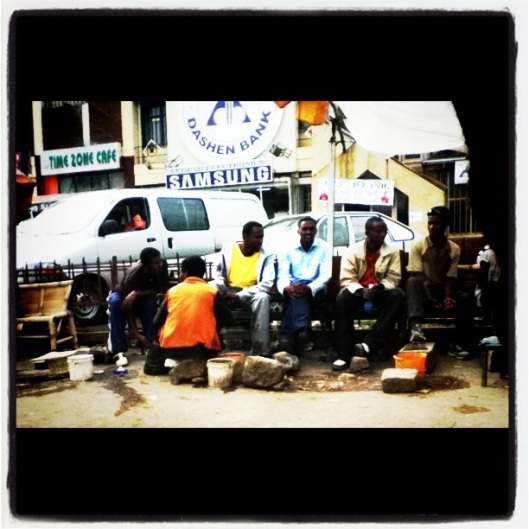 Initially I found this practice fairly amusing, never have I been to a country where there was such a deep ingrained culture to have freshly polished shoes. Where it was taboo to walk around with slightly dusty shoes. I found this practice particularly amusing during kermt, where it rains without fail on a daily basis and the streets become a canvas of mud and rocks. It didn’t make sense to me that one would get their shoes polished, walk several steps and have to repeat the process. Soon after I realized the utility of the service these listros provide. Having to walk from my house to the office, it became part of my routine to stop by one listro boy’s particular spot in the mornings, exchange greetings and have my shoes polished.

I then began to ask about the nature of this profession and how it came to be such an integral part of urban culture in Ethiopia. For many of these listros, the meager earnings from shoe shining provide a vital life line to life in the city and possibly at times to supporting family members. I discovered that most of these young boys are migrants from outside Addis. Initially listros were known to be from a particular tribe, Guragai, who are renowned for their business and entrepreneurship skills. A job as a listro for them is the first step in the ladder to becoming a self-made business man. Many of these listros worked to save up funds and pool it together to jump to the next rung in the ladder or renting a small mobile stall in Merkato (Africa’s  largest open air market….a city of its own). From there as their liquidity increases, they move up to renting bigger venues and becoming more established business men. I admired this sense of resourcefulness that instilled the dogma of “hard work, can pay off.”

These days, the listro market although still majority Guragai, is now infiltrated by many young boys form other tribal groups (most notably the Wellita) trying to emulate the success of those who have gone to become well established business men or have found means to gain access to higher education. In trying to do a bit of ad-hoc research about the origins of the name ‘listro’, I came across some noteworthy organizations and others who are trying to portray a dire situation where these young boys are systematically victimized. The latter fail to understand the intricate business ethic that is instilled within this community of young boys and do little understand their mentality. Rather they are seen as drifters who have been neglected by society. They fail to understand that the services they provide are highly appreciated by the general public. More importantly is that these young boys do not see a lifetime of shoe-shining in their horizon, but instead see it as a step in becoming self-sufficient and capable of earning an income. Their intentions are to earn and save sufficient amount of money to move up to the next venture; making way for the next wave of  young listos to occupy their ranks. Further in reading some of these accounts, it makes it seem these young boys are aimless and have no prospects. But in reality many are trying to go to school and take up this profession on the side.

2 thoughts on “So fresh and so clean clean: Ethiopia’s listros ‘shoe-shine boys’”